Home » Repair » 5 Causes and Symptoms of water in gas tank

Hi there my name is Vince, and today we’re talking about water in gas tank and how to remove the water if you get it in your vehicle’s fuel tank.

What’s so bad about a little water in the tank?

The internal combustion engine is designed to only suck in water and fuel. If water happens to be present in the gas tank, it can cause performance problems and premature engine failure. This is bad news for both new and older cars.

Small amounts of water in the tank is easy to address without removing the entire gas tank and emptying the contents. In most cases, simply filling the tank with high quality gasoline and driving the car normally is enough to eliminate the problem.

But what happens if there happens to be a lot of water inside the tank? What are the symptoms of water contamination? You might think this is an impossible scenario, but this type of thing can happen without you even knowing it.

Symptoms of Water in the Gas Tank

When water is present in the gas tank, you can expect the following symptoms when you drive the vehicle:

What causes water to enter the gas tank?

Water can enter the gas tank in a variety of ways such as:

There are a lot of things that can go wrong in the process. If ground water seeps into the storage tanks under the gas station, the fuel will be contaminated by water even before it reaches your gas tank. In order to prevent this problem, you need to choose where you fill up. It is preferable to sway away from old gas stations or those located in an area where flooding is imminent.

How to Remove Water from Gas Tank

The best way to remedy the problem is to consult a professional mechanic. As you know though, mechanics can get expensive! I always suggest people try using a fuel additive like Iso-Heet, or trying to fuel up the vehicle with high octane pump gas.

In mild cases of fuel contamination, simply filling up the tank with the highest-quality fuel is enough to solve the problem. The water will be saturated in the gasoline and will be burned off by the motor, hopefully without idling or performance issues.

Small amounts of water in the tank can also be eliminated by using a fuel additive such as Iso-HEET and Hydroburn G. Simply pour the fuel additive to a tankful of gasoline and let the product do the rest. But if there are larger amounts of water present inside the tank, additives will not be as effective as draining all the fuel and removing the gas tank. 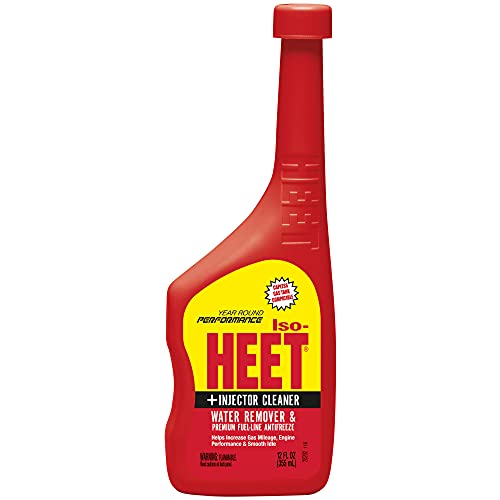 Whatever the case may be, if you can afford it, taking your vehicle to a professional mechanic may be the best choice. In the future, make sure that you only buy top tier fuel from reputable gas stations to ensure the highest possible quality.