Think you got bad ball joints?

So you’re having some issues with your car’s suspension and you want to get a better understanding of what may be causing it before you take it into the shop to avoid getting “taken for a ride” so-to-speak.

No? Maybe you’re just curious what exactly ball joints are.

Or you could just be a car nerd like myself and you want to be able to explain to grandma in excruciating detail the differences between a ball joint and a tie rod at Thanksgiving.

I’m not here to judge. I’m here to help.

In this article we’ll go over:

What exactly does a ball joint do?

A ball joint is a component of a car’s suspension system that connects the steering knuckles to the control arms. The ball joint allows for smooth movement while turning and driving over uneven surfaces. It is essentially a ball-and-socket joint that allows for a range of motion similar to the human hip joint.

The ball joint allows the wheels to move up and down as the car goes over bumps and uneven surfaces, while still allowing the wheels to turn. Without ball joints, the suspension would not be able to properly absorb the impact of the road and the steering would be extremely limited.

The ball joints are designed to withstand a significant amount of stress, including the weight of the vehicle, the forces of braking and acceleration, and the forces of turning and going over bumps and uneven surfaces.

Ball joints tend to last a long time but due to their constant use, they do wear out eventually. Driving over rough or uneven surfaces or heavy loads often can cause them to wear out faster.

Anatomy of a Ball Joint:

The ball joint consists of a ball and socket assembly that is enclosed by a metal housing. The ball stud is made of steel and is connected to the steering knuckle. The socket is connected to the control arm and is filled with grease to reduce friction and wear.

If you’re interested in the nitty gritty technical aspects of the design, Google Patents is a great resource. Here’s the link:

It’s worth noting that the design of some modern ball joints can vary depending on the manufacturer. Some car manufacturers have their own design for ball joints that includes proprietary features, but the basic functionalities and components remain the same.

If you’ve got worn ball joints, check your tie rods also. We have a guide to bad tie rods.

Can a bad ball joint cause uneven tire wear?

Is a bad ball joint dangerous?

Worn ball joints can cause a variety of problems with a car’s suspension and handling, and in extreme cases, can even cause the steering knuckle to separate from the control arm, which can cause a loss of control of the car and a potential accident.

I’m sure you’ve seen those cars on the side of the road with a wheel or two that’s folded underneath the car and the body of the vehicle collapsed on top of it. Nobody wants that happening on the road while they’re driving.

Don’t be that guy. If you are experiencing any of the symptoms above and are not confident in your mechanical abilities do not hesitate to get your vehicle inspected by a professional.

Notice I said professional. That does not include your Uncle that does all his own oil changes and forgot to reinstall the drain plug that one time… 🙂

The most common destroyer of ball joints that we have found are:

Listen, this front suspension component will eventually wear out. But if you’re buying new ball joints every 15,000 miles there could be a bigger problem. If possible, try to avoid those big bumps in the road, going overlanding/offroading, or slapping huge 35×12.5 R20 mud tires and wheels on your rig.

The cost of repairing or replacement can vary depending on a number of factors, including the make and model of the car, the quality of part used, and the cost of labor.

Hire a professional mechanic: The cost can range from $200 to $600 or more, depending on the factors mentioned above. This cost includes the cost of material, as well as the cost of labor.

DIY: If you choose to do the work yourself, the cost will depend on the cost of the ball joints, which can range from around $20 to $100 or more, depending on the make and model of the car. You will also need to factor in the cost of any tools or equipment needed to perform the repair or replacement.

A pair of 2012 Toyota Camry lower ball joints cost $100 total for a driver and passenger pair:

A heavy duty modern ball joint press is a must if you DIY this job: 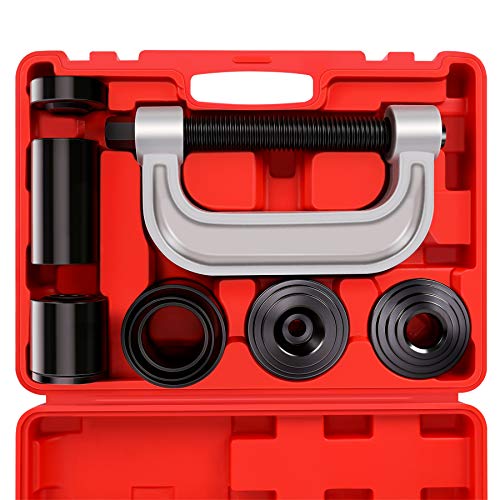 As always, if you are not highly confident in your mechanical abilities do not attempt to replace these parts yourself. Hire a professional. I cannot stress just how dangerous it is to install these suspension components incorrectly and drive on public roads.